Visit of the Crown Prince of Abu Dhabi to Paris [fr]

On 21st November 2018, His Highness Sheikh Mohammed bin Zayed Al Nahyan, Crown Prince of Abu Dhabi and Deputy Supreme Commander of the UAE Armed Forces, made an official visit to Paris. In the framework of the Year of Zayed, the visit aimed to strengthen the historical ties between France and the UAE.

Welcomed by the French minister of Armed Forces, Mrs. Florence Parly, the Crown Prince of Abu Dhabi met with the President of France, Mr. Emmanuel Macron, and the Prime Minister, Mr. Edouard Philippe. He also visited Sheikh Zayed Center at Louvre Museum, and met with Emirati students in France and French CEOs.

Meeting with the French President: reaffirming the strength of the French-Emirati strategic partnership

Both parts had in-depth discussions on regional and international issues of common interest and priorities, especially on the fight against terrorism and extremism. During the meeting, H.H Sheikh Mohammed bin Zayed Al Nahyan and the President of France, Emmanuel Macron, discussed the long-term perspectives of the bilateral relations in the fields of economy, trade and investment, in line with the historic and strategic ties between France and the UAE. 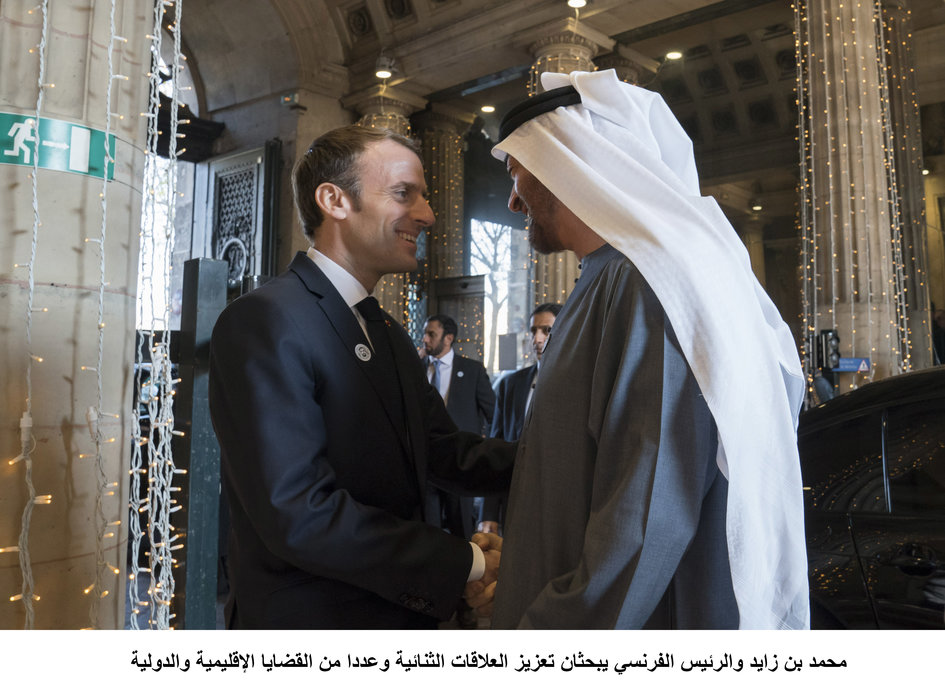 Both parts underlined the common aim to pursue close consultations and coordination at a high level, on regional and international issues of common interests, through pre-existing institutional frameworks such as the French-Emirati Strategic Dialogue.

H.H Sheikh Mohammed bin Zayed Al Nahyan visited Sheikh Zayed Center at Louvre museum, with the French minister of Culture, Mr. Franck Riester, and the director of the museum, Mr. Jean-Luc Martinez. On the occasion, both parts hailed the success of Louvre Abu-Dhabi museum, one year after its opening, as well as the ongoing cooperation for the programming of new temporary exhibitions and the coordination of French collections loans. 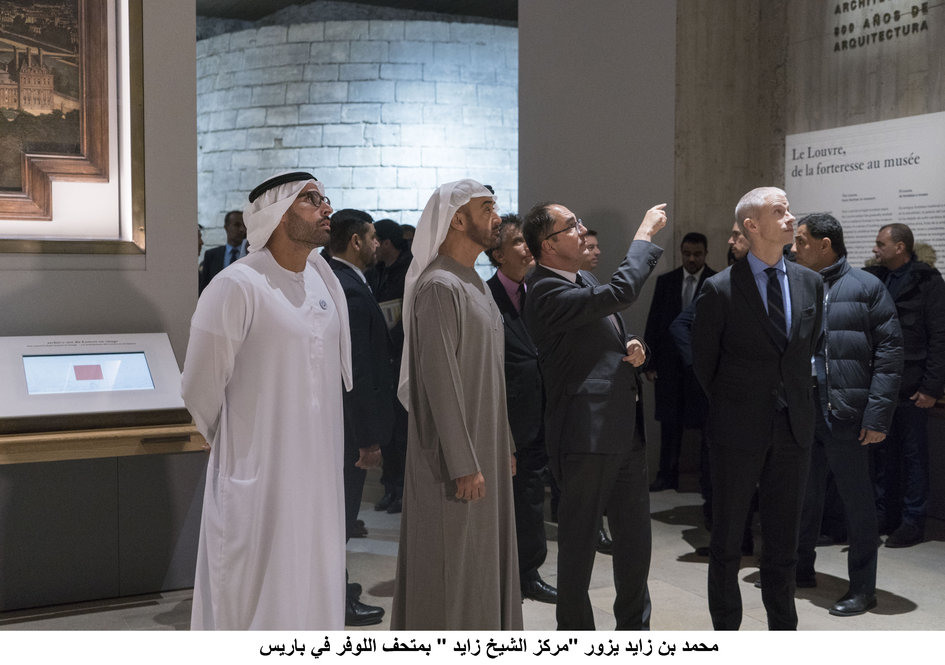 On the margins of the visit, Sheikh Mohammed bin Zayed met with 64 Emiratis studying in France. 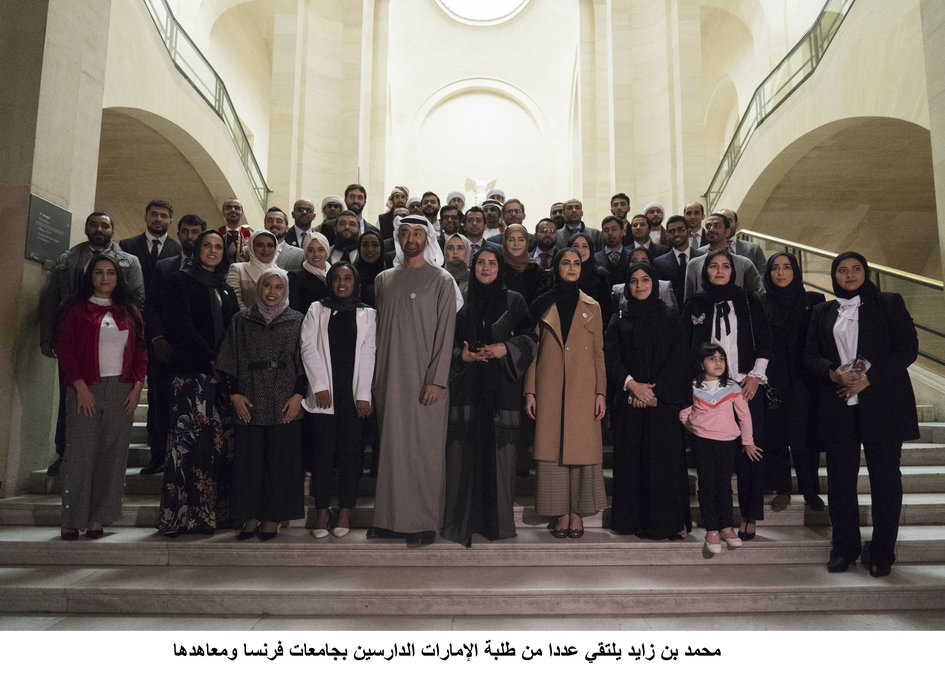 Meeting with Édouard Philippe: the economic partnership between France and the U.A.E to be strengthened 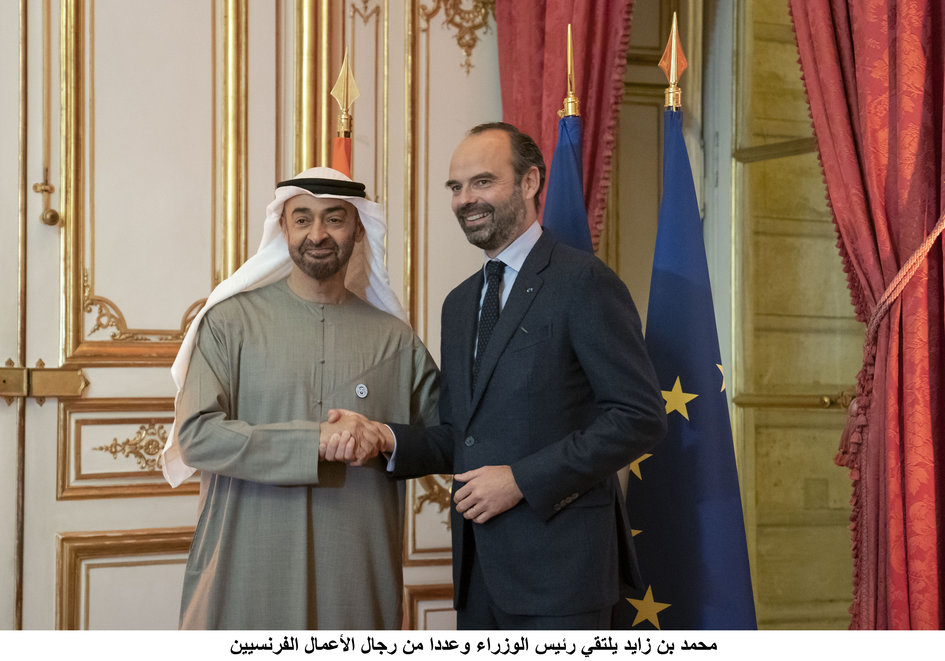 H.H Sheikh Mohammed bin Zayed Al Nahyan has been invited by the Prime Minister Edouard Philippe for a dinner, with the French minister of Economy, Mr. Bruno Le Maire, and CEOs of French companies, among those Total, Thalès and Airbus. During this business meeting, both parts hailed the success of the French-Emirati economic Forum, which second edition took place in October 2018 in Paris, to explore the ways to enhance economic cooperation between both countries, to intensify bilateral exchanges and to foster joint investments projects. 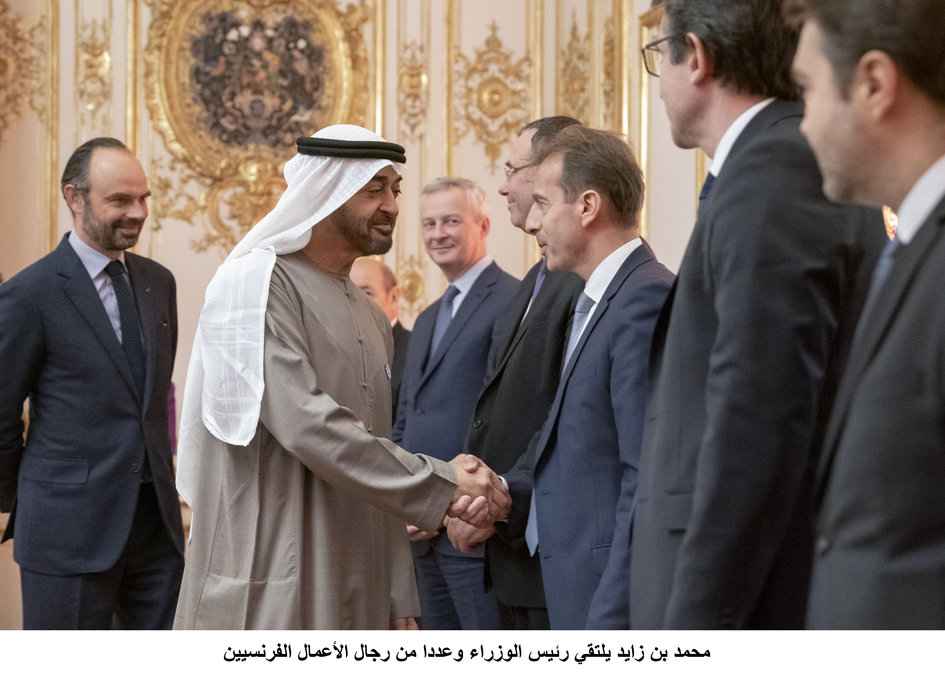 Both countries signed an agreement between Mubadala Investment Company and Bpifrance, on the creation of a new joint co-investment program for an amount of 300 million euros, dedicated to the French VC, technology and innovation space. The agreement was signed on by Nicolas Dufourcq, Chairman of Bpifrance, and Khaldoon Al Mubarak, Chairman of the Executive Affairs Authority, Abu Dhabi.

Both entities are also in the process of agreeing the extension of the existing co-investment program (Franco Emirati Fund) with additional 700 million euros. The co-investment program was created in 2014 and has already committed more than 300 million euros to support the development of French companies with a proven growth potential through long-term investments in healthcare, education, elderly care, real estate and affinity insurance.

After the discussion, the two ministers attended the signature of two agreements on medical cooperation. Paris Hospital Foundations and the American Hospital of Paris each signed agreements with the Departement of Health of the UAE to set the conditions under which the French party shall provide medical services to Emirati patients. 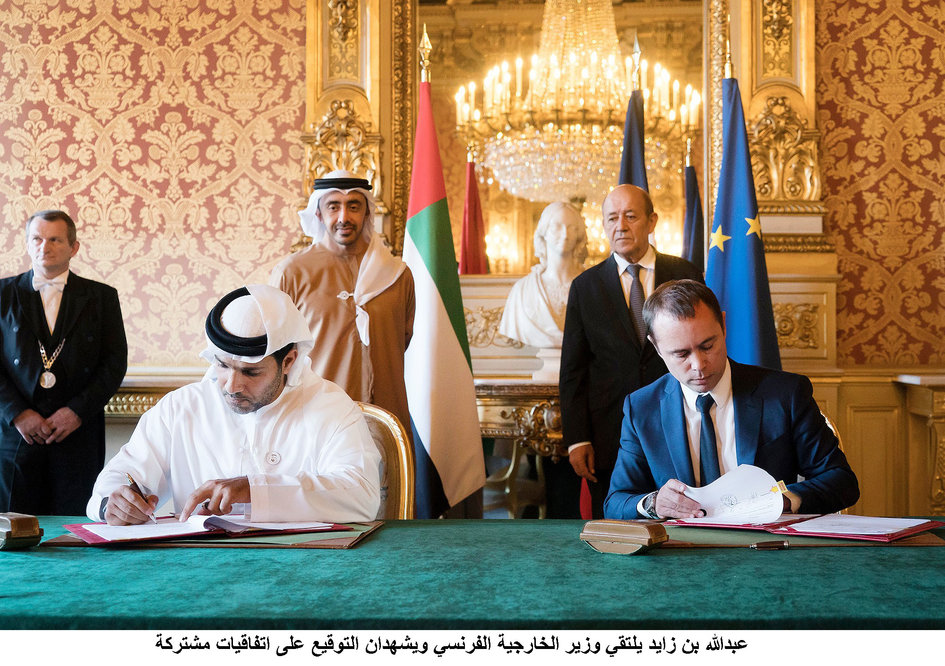 Signature of the medical agreements, attended by the two Ministers of Foreign Affairs
WAM

Read the joint statement on the visit to France of H.H. Sheikh Mohammed Bin Zayed Al Nahyan to France