Ubisoft Abu Dhabi and the French Embassy to the United Arab Emirates launch "GameLab". A competition and a series of workshops to introduce Emirati students to the creation of video games

27 June, 2018 – Abu Dhabi - Ubisoft Abu Dhabi and the French Embassy to the United Arab Emirates have announced this morning the launching of GameLab, a project aiming to develop cooperation and share expertise between France and the United Arab Emirates in the field of creative industries and to train young talents in the UAE universities in the sector of video games. The cooperation agreement has been signed this morning at the Résidence de France (French residency) by H.E. Ludovic Pouille, French Ambassador to the United Arab Emirates and Yannick Theler, managing director of Ubisoft studios in Abu Dhabi, in the presence of representatives of the video games industry and developers active in the UAE , as well as representatives of the cultural and academic spheres and students.

GameLab consists of organizing an interuniversity competition which will engage a team of students per university. The challenge for each team will be to develop a concept of a video game. Throughout the academic year, a series of workshop will be organized within the studios of Ubisoft in Abu Dhabi. The Emirati students will benefit from the mentoring of Ubisoft developers. These workshops will allow the students to develop the concept of their game by strengthening their skills of graphic and artistic design until the presentation of their final product at the end of the year, during a “Game pitch”. 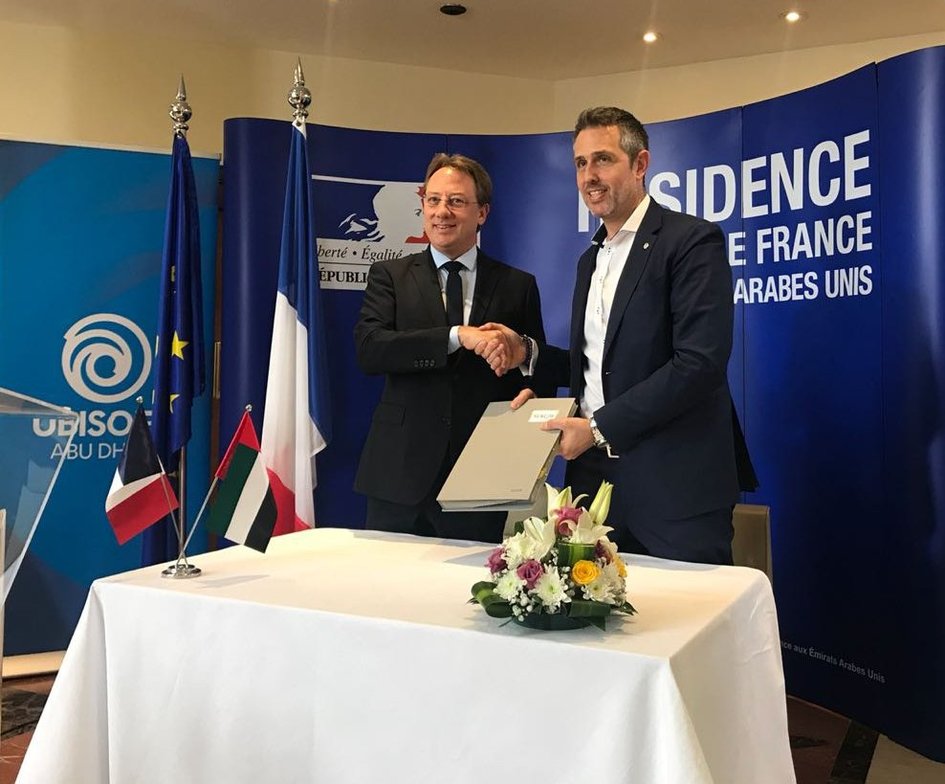 Welcoming this new partnership, H.E. Ludovic Pouille, French Ambassador to the United Arab Emirates, declared: « I am very pleased to sign this agreement with Yannick Theler, twenty days after my visit to Ubisoft’s studios in Abu Dhabi, within Twofour54. As part of the 2018-2019 French-Emirati cultural dialogue, our goal is to strengthen cultural and educational cooperation with the United Arab Emirates, giving priority to youth.

The GameLab project that we are launching is a transversal innovative project, bringing together several actors: Ubisoft, a globally recognized French company in the sector of video games and firmly established in the United Arab Emirates, the cultural service of the Embassy (Institut français) which provides technical and institutional support, and of course, the young future developers from France and the UAE who will participate.

The organization of a competition encourages everyone to give the best of oneself and fosters the rise of a video game ecosystem in the region. The cultural and creative industries are also an important economic prospect for France and the UAE, at a time when our two countries are betting on artificial intelligence. »

The French government is particularly active in supporting cultural and creative industries, including video games. In a recent interview, the French minister of culture, Mrs. Françoise Nyssen had declared that video game is “an art like any other”. “It is part of culture and we are deeply attached to it. In France, it is a very active and creative sector. A lot of people work in the field of video games : inventors, designers, engineers. We will support them”. Co-signing the agreement, Yannick Theler, managing director of the Ubisoft studio in Abu Dhabi declared
: “Ubisoft is delighted with this agreement which will present the techno-creative potential of the video game industry and the numerous career opportunities in this field. Through its international network of studios on every continent, Ubisoft collaborates with several universities to ensure that the talents of tomorrow have a good knowledge of the requirements of the industry. Partnerships like GameLab are a key opportunity for developing and consolidating the local video game ecosystem.”

The workshops scheduled in the frame of GameLab will take place throughout the academic year. The first session will aim to express the creativity of the students and to give birth to new ideas. The students will then be taught about the questions of intellectual property and copyright, in cooperation with the French National Institute of Industrial Property (INPI). They will benefit from a workshop dedicated to graphic art, benefiting from French experts of the field. At the end of the academic year, the participants will be asked to present their projects. The winners of the competition will be rewarded with the opportunity of an internship in the Ubisoft studios in Abu Dhabi.