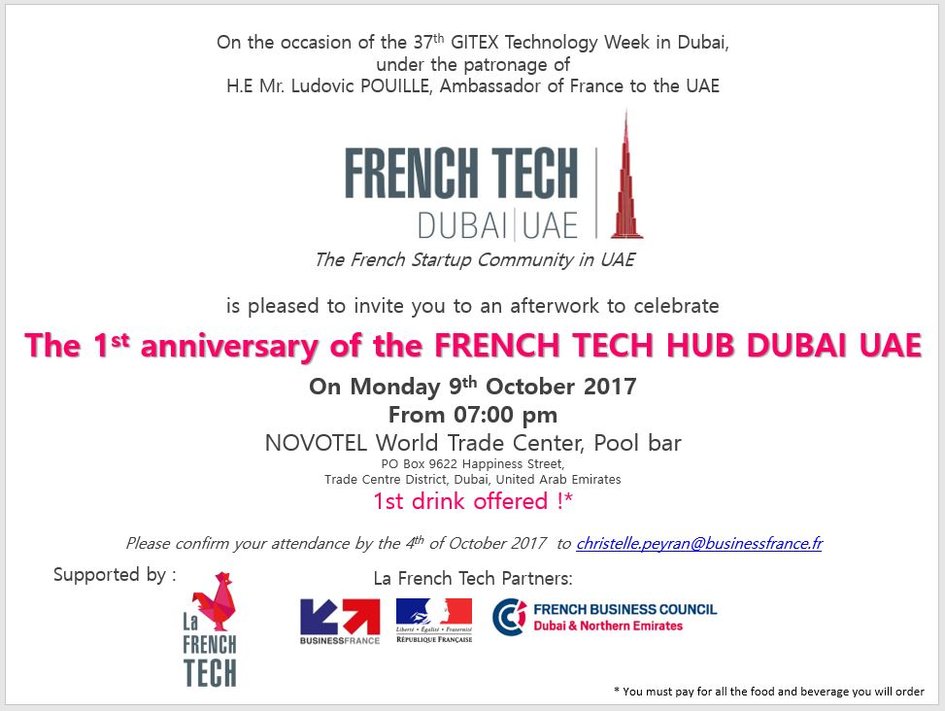 United Arab Emirates, September 26 , 2017- Business France, the national agency supporting the international development of te French economy will be hosting 20 leading French technology companies at GITEX, held from October 8 to 12, 2017, in Dubai World Trade Center (DWTC). The innovative and pioneering companies will be introducing their expertise in areas including 5G networks, Smart Cities, the Internet of Things, Virtual Reality/Augmented Reality and Artificial Intelligence at the French Tech pavilion in Hall 4 (Stands C436 to D410).

Within the Internet of Things sector, breakthrough French technologies will be presenting the latest accessories in the field such as the Wistiki Bluetooth tracker, live video solutions from a smartphone developed by Plussh, a personal multi-user cloud that can save data in a private partitioned space via Helixee by Novathings, and Kerlink’s machine-to-machine communication solutions.

Amongst the group of companies exhibiting, 10 French start-ups will also be making the trip to present advanced novelties and to meet the decision makers and investors attending the show.

“We see GITEX to be the region’s strongest platform to share knowledge and to showcase the best in French technologies and are offering the exhibitors a tailored program to support their development in the Gulf. By taking part in GITEX, strong ties will be developed with local leaders while also introducing French innovation throughout the world of technology”, said Fayssal Majid, head of the French Tech pavilion at Business France.

According to the France’s professional trade-union Syntec Numérique, the French digital sector is forecast to increase by 3% in 2017, after growing by 2.9% in 2016, as a result of the digital transformation of the economy. Market growth for software exceeded expectations last year (+3.4%) and is expected to grow even faster in 2018 (+4.2%), which represents 1,800 companies in the digital sector. The SaaS model (use of remote cloud-based software) in particular is expected to account for €2.1 billion in 2017, i.e. 18% of the market.

This year, SIGFOX will be the official partner of the French Tech Pavilion.

To stay up to date on the latest news of the French economy in the region, you can follow BF_MiddleEast on twitter. For more info, feel free to contact Business France: Miryem Oukas Messidi Head of Communications – Middle East Mobile: +971 (0)55 478 32 15 Mail : miryem.oukasmessidi@businessfrance.fr

Business France is the national agency supporting the international development of the French economy, responsible for fostering export growth by French businesses, as well as promoting and facilitating international investment in France. It promotes France’s companies, business image and nationwide attractiveness as an investment location, and also runs the VIE international internship program.